Debra Opri is widely considered to be one of the most recognizable female litigation attorneys of the 21st Century, both in the courtroom and on television.

The majority of Debra Opri’s cases deal with the representation of everyday people who are in need of a passionate advocate when the system is not working for them or when their finances prevent them from hiring expensive attorneys and/or law firms. This is where Debra Opri is most sought out, and for which Opri personally selects her clients on a case by case basis.

Debra Opri is most recognized for her high profile media cases including the Anna Nicole Smith paternity case, the Michael Jackson molestation trial, the David Hasselhoff divorce battle, and the James Brown sexual harassment trial, Debra Opri has for almost thirty years, publicly distinguished herself from many other media attorneys in that she actually litigates her own cases, most of which are under the glare of the media spotlight.

Debra Opri continues to be a nationally, and internationally known legal analyst for many high profile media cases, and is regularly pursued as a commentator for media and print/news magazines for her insight into these high profile cases and stories. Go to Media Appearances

But Debra Opri is first and foremost a litigator. As founder and partner of Opri & Associates, a law firm she started in 1989,she has long been considered to be on the frontline as a preeminent and vocal litigation attorney for more than two decades on behalf of her clients and causes, who come from every walk of life, some famous, most not famous, but rather regular everyday people who need someone to fight for them. And this is where Debra Opri is at her best. Opri’s legal expertise is drawn from a wealth of knowledge on diverse cases ranging from divorce, palimony, custody, domestic violence and paternity as well as those civil and criminal cases she has handled. Debra Opri uses her talent, and natural courtroom abilities to emphasize the importance of the ‘media’s perspective’ as a vital component in many of her clients’ cases and/or issues. 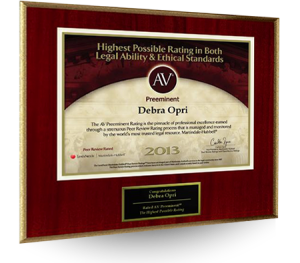 Debra Opri, a graduate of NYU and Whittier Law Schoool, is licensed to practice law in California, New York, New Jersey and the District of Columbia. Debra Opri has also been honored by the Los Angeles Times as one of Los Angeles’ Women’s Leaders in the Law; and was honored by the Coalition for At Risk Youth [CARRY] for her longtime work on behalf of at risk children.

While the majority of Debra Opri’s clients are normal everyday people, Opri’s reputation became highly regarded as being that of both a leading female attorney in the media and in the courtroom, with a zeal for fighting for parents’ and children’s rights, including the internationally covered paternity action involving Anna Nicole Smith’ daughter, which Opri successfully fought and won, when Opri secured the paternity rights of the natural father over his child, resulting in Dannielynn’s father securing custody.

Debra Opri is the only television commentator today who is most well regarded as having personally worked on a great many high profile cases with some of the biggest names in the entertainment business. Her clients have included the parents of Michael Jackson, Katharine and Joe Jackson, for representation of their parental interests during Jackson’s child molestation trial; Jermaine Jackson, brother of Michael Jackson, during his divorce proceedings. Opri also agreed to step into an ongoing high profile custody fight between Pamela Hasselhoff and David Hasselhoff, and vigorously defended Pamela in her custody case. As well, Opri represented the ex girlfriend and mother of David Caruso’s two minor children in his paternity and palimony cases. One of the world’s most famous cases was the Anna Nicole Smith paternity battle, with Debra Opri fighting both nationally and overseas, to secure her client his rights as the natural parent of his daughter, Dannielynn, and which ended successfully, thanks to Debra Opri’s long term commitment to her client and his child, and the battle to preserve a parent’s rights.

Debra Opri successfully represented the actor and comedian, Kevin Hart, in what started as a contentious divorce matter, but which ultimately ended amicably and in a favorable settlement for her client, thanks to Opri’s litigation strategies and tenacious litigation style.

Opri first came to national attention as the Godfather of Soul’s, James Brown’s, attorney when she successfully defended him in a California sexual harassment trial which Opri won after a long trial and courtroom battle via a jury trial verdict. Part of Opri’s effective strategy for James Brown during this case was offering the jury – and media – a new perspective of the iconic singer, differentiating his personal and professional life while maintaining his innocence. Again, Opri’s steadfast commitment and efforts to both her client and his cause, resulted in a landmark victory for the legendary performer. It was, in fact, the first time James Brown had ever successfully challenged a sexual harassment allegation, and after Opri’s victory, the Godfather of Soul’s career – and reputation – was reborn.

Debra Opri is most well known for her passion in fighting for and protecting parents and children’s rights. After a four year battle in the courts, Opri secured a natural single mother’s rights over her child and against a non parent who had secured custody and visitation rights despite her contesting this, and for which it took an appellate court to say to the lower court….”reversed.” Debra Opri will continue the fight for her clients, and she will do it with the strong belief that ‘Opri will always be ready for and will take on the fight, as long as there are parents and children in need.’